To Design a Parade of Flying Colors 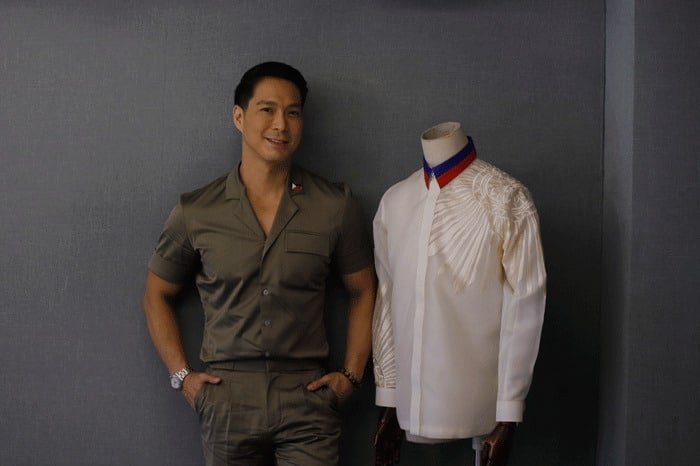 I am the first to arrive at FRANCIS LIBIRAN’s atelier on the second floor of the Peninsula Manila. The designer comes into the room, dressed in an olive utility suit, a welcoming smile on his face. “I love the barong you’re wearing,” he tells me. I ask him about the first barong he remembers wearing. “I think it was for my grandparents’ 50th anniversary,” he says. “I was six years old. I remember that it was RENEE SALUD who designed it. I have a picture. Yes, that was the first barong I ever had.”

Before he became a fashion designer, he was an architect. He studied at the University of Santo Tomas and worked for an architectural firm for two years. Afterward, he felt like it was about time he started doing what he really loved to do. He quit his job and enrolled in the Fashion Institute of the Philippines. “And that started everything,” he says.

His architectural background was useful when it came to bringing something unique into his designs. “It helped a lot, learning the discipline of that kind of conceptual way of seeing things.”

He always imagines the post of a building whenever he constructs a gown. “I think about how it has to have support,” he says. “At the same time, what the symmetry of the patterns will look like on the body of the person wearing it.”

Especially in his earlier work, architectural inspiration figured heavily in his designs. “I loved looking at the ceilings of churches and at windows. I wanted to apply those patterns to the designs of my clothes,” he says. Lately, he’s enjoyed working with abaca fabric, “because it’s very Filipino. And it has a sculptural quality to it. The fabric is stiff, but it’s interesting because you can do so much with it. You can manipulate it to take on a different form, like shaping it to look like a wave, a leaf, or a flower.”

Recently, his designs have been gaining a lot of international attention. We talk about the wedding barong he created for DARREN CRISS, the jackets he made for actor MENA MASSOUD to wear during his Aladdin tour, and the matador-inspired outfit he made for BILLY PORTER.

I ask him what it feels like to be one of the designers putting our local fashion on the map. “It’s such an honor when they mention the Philippines,” he says. “We’re becoming more recognized. Our culture and history are so interesting, and I feel, as a designer, it’s our role to explain this to the world.”

It’s been a busy October for him and his team. They have tirelessly been creating the uniforms for the 2,500 Filipino male and female athletes who will walk in the opening parade of the 30th Southeast Asian (SEA) Games, which the Philippines is hosting this year from Nov. 30 to Dec. 11. At the time of this interview, 1,900 pieces of this special design have already been produced.

“We should always think of what we can do to mix our tradition with technology and innovation.”

Today, Francis is allowing a sneak preview of his design, which is a contemporary take on the barong Tagalog. “The reason I chose the barong is because it’s distinctly Filipino. It’s our own,” he says. “To me, it’s like a blank canvas. I wanted to push the possibilities of what a barong could be. I’ve been experimenting with its design to see how I can innovate on our tradition without losing its elegant touch.”

He became fascinated with the Pintados, the “painted warriors” from the Visayan provinces who were known for their tattoo art. It is said that the more patterns a man had on his body, the braver he was. It felt like an appropriate symbol for the Filipino athletes as they courageously competed in their respective events. “There is a lot of meaning to their tribal tattoos,” he says. “My question to myself was, how can I place these beautiful patterns onto the barong?”


The most conventional way of placing embroidery on a barong is to sew a boxed, letter “U” shape onto the front or to simply place two vertical columns on the length of each chest. Building off the idea of tattoo art, Libiran decided to break the mould and place his patterns onto the shoulder, collar, and back of his designs.

As for the pattern itself, he knew that he wanted to use the Philippine flag, but there were restrictions on how the national symbol could be used on clothes. He decided to deconstruct its elements, allowing the rays of an art deco sun to play on the piña and jusi fabrics. The effect was to create a barong that was more textured and layered. A closer look, and the viewer would be surprised to see that the patterns looked as though they were embossed.

It has taken three months to put together all the barongs so far. “We do a tally every week, to monitor our deadlines,” Libiran says.

I asked if the female athletes would be wearing the barong as well, rather than the female counterpart of a saya or terno. When women first began participating in sporting events, wearing the same uniforms as the men was a way of expressing their equality with them, rather than getting typecast as players of girlier games. The decision for the female athletes to also wear the barong was in line with this powerful history.

What Libiran did was to feminize the cut of the barong for the women athletes. “I made the neckline a V-neck instead of having it buttoned until the neck,” he says. “I made it more shapely, adding 3/4th sleeves so they would be different from the men’s barongs.”

He shares that the first time the athletes came to get fitted for the uniforms, they were intrigued by the simplistic but interesting twist on the classic barong. “I explained the meaning behind it, to bring their spirits up and give them that fighting spirit of the Pintados,” he says. “‘What is the meaning of that word?’ Some would ask. ‘It means courage and bravery,’ I would say.”

Some expressed a desire to wear the barong again to future events. “So I made the flag portion detachable so that it could also be worn as a regular barong,” says Libiran. He says that he’s most excited to watch the swimming events, since he was a swimmer in high school.

He smiles and tells me how, when he shared his design for the SEA Games on Instagram and Twitter, it wasn’t only Filipinos, but also the international community that became intrigued. “They would ask me, ‘What is that made of?’ and I would say, ‘Pineapple, and it’s edible!’” he says.

He reflects on the way that local production of Philippine fabrics has evolved over the years.

“There’s an increasing awareness of how to innovate, like with our fabrics,” he says. “Usually piña is rough, but we’re trying to make it softer by adding silk and cotton to it, so it will be more comfortable to wear. Even with the maintenance, usually when you wear a barong, you have to dry clean it. But we’re also trying to make it more washing machine-friendly, so you could even handwash it and it wouldn’t rip.”

He tells me about some of his ongoing projects he has this year. He’ll continue to rework the barong and recreate a new concept that pushes the possibilities of what the national costume can be, while still respecting the tradition.

It’s something that Libiran has chosen to stand for, in turn, also showing us that we can also push the limits of what it means to be Filipino, breaking the mould, and reaching heights we never thought possible before.

“Filipinos are very creative and we need to think of something different, challenging what’s usual and thinking ahead in the future,” Libiran says. “We should always think of what we can do to mix our tradition with technology and innovation.”